It should be remembered that Cronsbach should not be considered the foundation for the majority of the lines as they simply took from the Haingraben and Birkenheide (Werner Jung's kennel) .

Although they seem to be in a lot of pedigrees and many consider that name to be one of the foundations of the breed, they are simply one of many that took Herr Jung's dream and work and moved forward with it.

The Cronsbach lines do mingle in with the majority of our dogs simply because they reach back closer to the time of Werner Jung than many, as well as the Haingraben slid off to the side and was not seen again not long after producing many of the Cronsbach foundations. Birkenheide was the same, and others soon picked up the torch and carried the pedigrees onward.

The first GP imported to Australia for example is a Cronsbach bred dog names Puck V Cronsbach.(Peter) He was brought over with a bitch by Mike Towel but she unfortunately ended up not being a part of the breeding program in that country. What is important to remember is that this one male was only (paternally) 3 generations from the Haingraben and Birkenheide bred dogs, and a mere 6 generations removed from the 1957 breedings which included Jutta/Onzo/Illo and Kitti. On the maternal side(following female 'tail' lines) he was 5 generations removed from Kitti.(photo attached)

This one dog, carried a huge dose of Herr Jung's pedigree choices which included Jona VD Birkenheide and Wigo VD Birkenheide (mother/son and also which Jona is from grandfather/grandaughter) Wigo was bred to his mother to produce Illo V Haingraben. So easily in one dog we can see the inbred equation in just a six Gen. Pedigree.

Looking at another well used line we see the "G" litter of Von Cronsbach which had Gerry/Glenn/Greg who were soundly introduced to many of the dogs that were imported to North America including the Pyselky line, which is fairly close to many pedigrees including known dogs as "Demon" and "Etna". Demon of course to many is known as the sire that was used to breed the "Kismet" litter which was brought to North America in uterus. Many of the dogs in the US and Canada can lay claim to having this pedigree or part of it.

Demon also shows up in the Awarenring lines, again that have made their way to North America. He is a mere 11 generations removed from the rebirth project. Due to the many father/daughter and mother/son breedings back in the mid 50's simply because there was not enough genetic material at the time, the base line inbred co efficient tends to run about 35% or higher. To many, this is heavily inbred and for those fans of outcrossing, impossible to lower (when looking at more than 3 generations of dogs) simply because only four dogs were used to begin the come back of the breed. Ten years later, the addition of another Min Pin added genetic material. In 1980 a Doberman bitch was added (Trace back the Von Blauen Wunder lines for her) and in the mid 90's the standard Schnauzer thanks to the efforts of the Kennel Yarracitta. We now look at an inbreeding co efficient down into the 20's on lines that appear to be outcrossed. Still high compared to many breeds that simply have more genes to work with.

The Doberman bitch used with permission from the German Registry was named Evi Von Der Edeltanne. She was a black bitch used for the purpose of increasing size in a breed where overall, the animals were getting smaller and smaller. She was intended to be bred to four different males, however only one breeding was done due to personal issues of the owner of the bitch.
Evi was born May 16 1988 and put into whelp by Fips Vom Nordkristall to whelp a bitch named Linda Vom Nordkristall on January 28 1990. This bitch matured out at 49cm. A big improvement over her lines to date and was in turn bred a number of times to only GP's. (4 litters-"V"-"W"-"M" and "P" litters) Size increased nicely as was desired with the majority of the F-2 generation averaging at 50-51cm

Currently the Von Blauen Wunder line carries these dobe genes and has recently added to the Von Hemp kennel through Wilma Vom Nordkristall (daughter of Linda) through her son Forest Von Blauen Wunder. 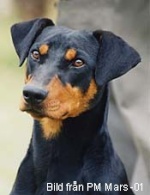